Get ready for the Rugby World Cup by crouching, binding and setting with these rugby apps

Has it really been four years? The All Blacks triumphing in their own back yard to win the Webb Ellis Cup, Manu Tuilagi jumping off a ferry and into the bad books of both the RFU and the New Zealand constabulary, the USA beating Russia 13-6 in the most charged encounter since The Bay of Pigs incident (probably).

If what you’ve just read confuses you somewhat, then chances are that you’re not too familiar with the game of rugby. But fear not – Friday sees the opening match of the 2015 Rugby World Cup, providing you with an excellent opportunity to develop an interest in this rough’n’ready sport. A global TV audience will be tuning in to witness the might of Namibia taking on the powerhouse nation of Georgia in the glamorous enclaves of Exeter’s Sandy Park, no doubt inspiring a whole new generation. Also, England might evoke the halcyon memories of ’03 by actually winning the entire thing, so that’s one reason to watch.

Dreaming aside, here, as ever, are ten of the best rugby-based apps around to help you develop a serious case of World Cup Fever.

Official broadcasters of the event for the home nation, ITV’s companion app is widely available across smartphones and tablets for UK users. It’ll provide news, highlights, and a fixture guide that’ll enable you to find which Northern Hemisphere minnow is playing which south Pacific island on what day. It also contains a version of the Flick Rugby game (more on that shortly) which you can easily lose hours of your life to.

The excellent Rugby World magazine has taken to the digital arena to release a ‘complete’ guide to the competition: featuring fixtures and venue guides, team lists and, for an extra 99p, a detailed history of every World Cup to date. With extra analysis from such rugby luminaries as Lawrence Dallaglio and Michael Lynagh, and a ‘live feed’ (i.e. regular updates from the tournament), it’s a fine interactive app to have backing you up in the scrum.

Don’t know your rucks from your mauls, or your breakdowns from your marks? Never fear, for the World Rugby laws app is here to help you learn/cheat your way through the World Cup watching experience. With an extensive list of the game’s many rules, get studying now via the library of video examples and animations to bring the minutiae of rugby to life.

It’s half-time in the crucial Pool B game between Samoa and the United States – whatever to do? Well, why not whip out your phone and get flicking! Er, that’s right: Flick Kick Rugby is a popular mobile game that involves you taking on the role of the kicker in an attempt to plant the ball over and in between the goalposts. Placing your conversion attempt at varying distances and wind speeds, it’s an addictive game that continues to be a challenge even when you think you’ve mastered the art of flicking a virtual rugby ball towards a set of virtual posts.

Quiz!!! The! exclamation! point! presumably emphasises the high, high levels of fun that come hand-in-hand with this app, which is officially endorsed by the England team (RFU). It’s nothing special, keeping the boundaries of ‘quiz’ to an eternal (ok, 100) picture-based format, testing you on your ability to recognise England players from past and present. “Starts schoolboy easy and gets prop forward hard”, says the bio – top marks for the pun, mind.

Highly rated on the App Store, Sublinet’s creation may not be in quite the same league as Football Manager, but it certainly provides an ample alternative for the rugby format. Create your own club, devise training regimes and prepare your own game strategies in your hunt for ‘the championship’ (presumably the World Cup). Happily, you guide your team through real-time matches that are presented in the 2D-style that is so fondly reminiscent of Championship Manager 4 it hurts – like being thumped in the ribs by Schalk Burger. 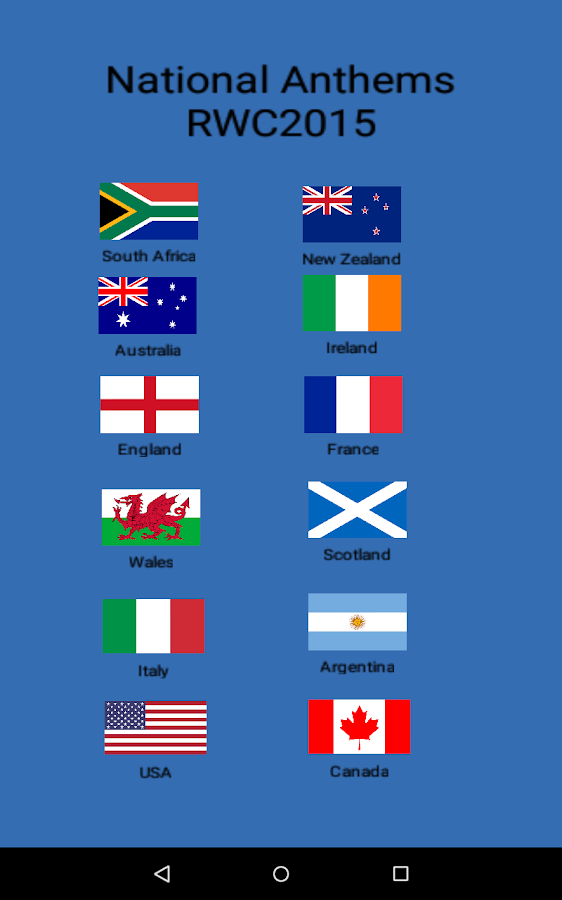 Want to brush up on the lyrics to Romania’s ‘Deșteaptă-te, române!’ (‘Awaken thee, Romanian!’)? Of course you do! Containing hymn sheets for all 20 of the anthems that’ll be belted out during the tournament, it also has video links embedded to show the teams proudly singing (sorry, “performing”) their anthems, as well as clips of the always-fantastic New Zealand haka. Now, repeat after me: “Strigați în lumea largă că Dunărea-i furată / Prin intrigă și silă, viclene uneltiri!” (translation: “Proclaim to the wide world that the Danube is stolen / Through intrigue and coercion, sly machinations”. Genuinely.)

Because who doesn’t want to be official every now and again? If you’d like to see how tournament organisers IRB are viewing proceedings, why not download their ‘number one guide to the tournament’? To be fair, it’s a pretty good service: you can personalise the app by selecting your favourite team and following their preparations for every game through news articles and video updates, as well as possessing the capability to add their matches to your phone’s calendar, and checking ticket availability. There’s also a Dream Team game, which could be amusing if you’ve a penchant for Fantasy Sports.

By far the most immediately fun-looking of all the rugby apps displayed here, classy 8-bit graphics are the order of the day here as you take control of your own Anthony Watson figure to weave your way past hapless defenders through an intuitive finger swipe action. Score as many tries as possible before the timer hits zero, earning achievements along the way. Simple and addictive entertainment – and it’s free! 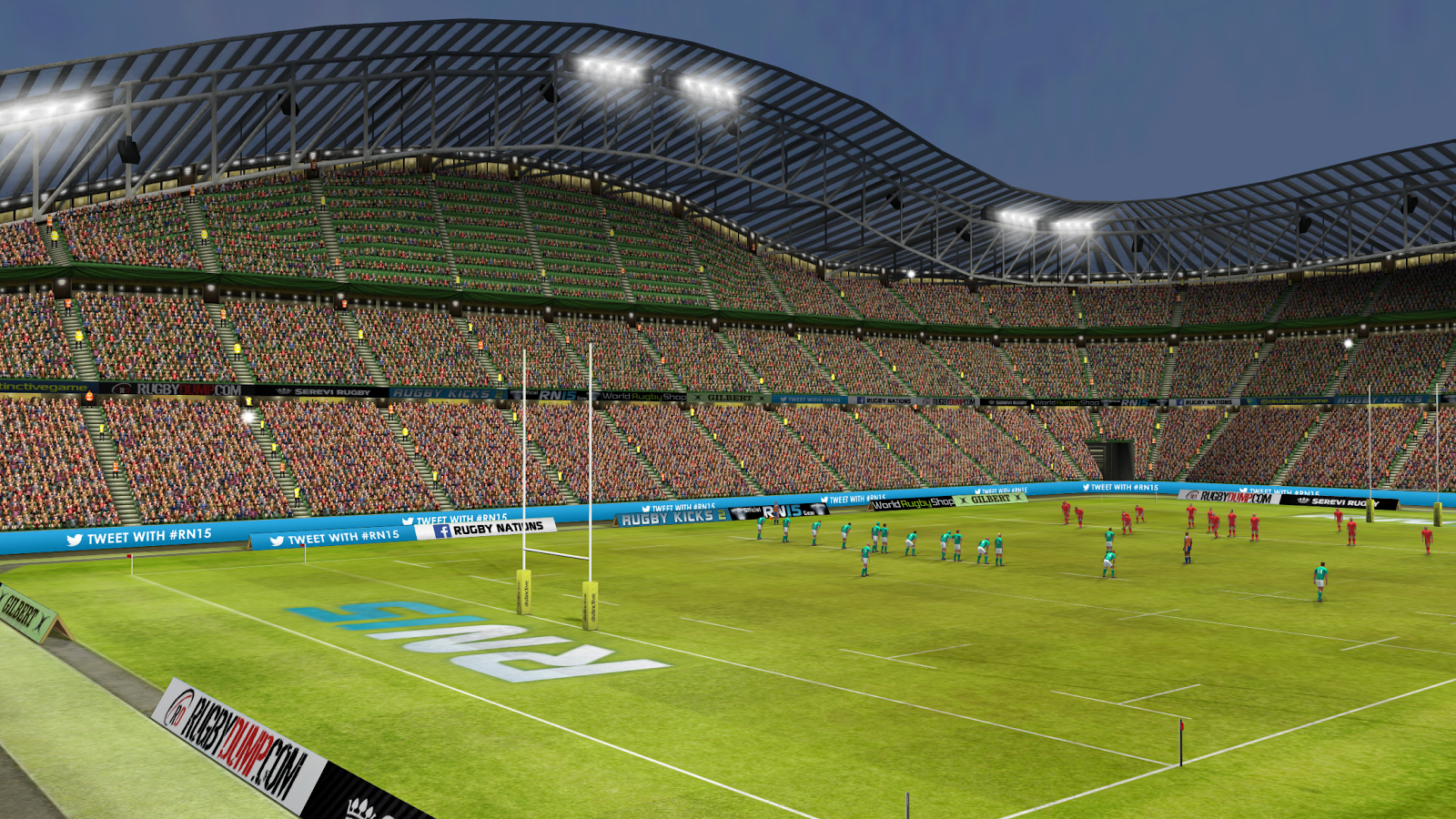 If 3D video games are more your thing, then Distinctive Games has you covered. For a decent fee of £3.99, you can have access to their fully-featured career mode, ‘Optimized Phoenix technology’ (er…), and upgraded defensive AI for a ‘more realistic rugby experience’. Sounds good, but there does have to be a reason why a major rugby game has never taken off in the way that FIFA has…